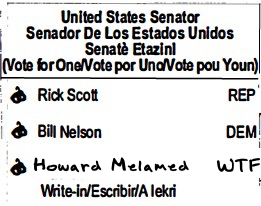 Coral Springs FL : ( November 10,2018 ) I am not a big fan of the way in which votes are taken in Broward County.  I was the candidate for Coral Springs City Commissioner back 4 years ago that lost by 102 votes – and learned a lot about how things here are and are not.

In my case, I found out at the 2014 election that the Supervisor of Elections – Brenda Snipes –  lost a few ballot boxes .  I actually have a video of them picking them  up since it was in the storage room filled with ballots at the park building where there was a meeting to discuss  the results of the election.  Then in a county that did Computerized Voting, when the recount happened the computers found to have made a mistake by 7 in my favor.  I still lost.  How do Computers make mistakes? Simple:  Garbage In –> Garbage Out .  The people that work for the Supervisor of Elections must have been experts in garbage.

It really was not Brenda Snipes that forgot a box or two of votes. Nor was it her that picked up the missing one we found.  The missing box was picked up by a few guys in a truck that were hired temporarily by Brenda  Snipes – SOE .  No Police escort.  No way of knowing that the votes in the box were actually counted.  No way of knowing if they would all be for me or for my opponent .  When you lose by 102 votes and the computer makes a mistake for another 7 – who knows how important it is to count EVERY vote? Me. I do.

The one thing is for sure.  It would seem that  our county  does not take voting seriously enough to put the best people in position to make sure all of  our votes are counted.

Where the hell do we live ? In some third world shithole ( as he President likes to put it ) or in the United States of America – Broward County Florida –  where I thought voting is a serious business.

This is not about people willingly trying to usurp the voters of this county – like Scott who fears for those uncounted votes in our county spoiling his party and ruining his reputation with  Trump. It’s not about  Left Wing Liberal Assholes or Right Wing Conservative Assholes.   It’s about us American citizens that seem to be getting dick slapped by both all the time.  First on the left side by the left and then on the right side by the right. It’s about the incompetence of  the Supervisor of Elections –  This shit has got to stop!