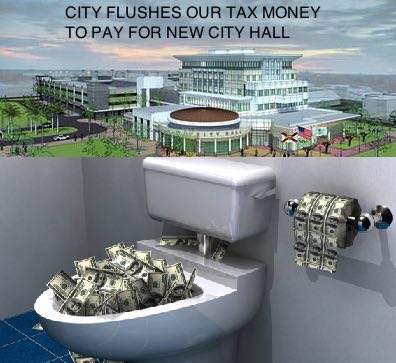 In case you have not been paying attention, the City Hall which I called the Taj Mahal during my campaign for City Commissioner almost 2 years ago, has pegged up in cost to $38,000,000.  Now that you did not pay attention 2 years ago when I was doing my best to get you to vote for me so I could stop this craziness you will be paying for it in your tax bills. 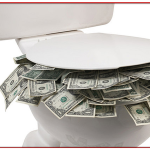 I am not going to focus on those people at the city commission that voted for it, but more on  commissioner Larry Vignola who made sure he went to the bathroom ( as reported)  when the vote was taken to approve the budget. He knew that this would be an issue pinned on him , and   I think he was checking out the toilet to see if he could continue to flush more of our tax money down it, as he has been doing since he entered the office 6 years ago.  Even though the maximum amount of time anyone can sit as a commissioner is 8 years,  he is running for another 4 year term due to a quirk in the law.

Commissioner Vignola was adamant in calling me a liar ( before Donald Trump coined the phrase) when I said that the City Hall was already up to $28Million and would climb to more than $35Million more than 2 years ago.  He said on record at commission meeting that the price of the city hall would be only $21,000,000 and that I was lying. Looks like I knew what I was talking about and he didn’t.

During my campaign I had presented several facts to the citizens , one of which was that the city could have purchased the ‘Darth Viader’ building ( the all black building on University) for $11,000,000 and had 2 times the space and all the parking they wanted.  I said that if elected I would join with Carter and Campbell and stop it.   I lost the election by 102 votes.   102 voters decided that this was not important and I lost the election to Lou Cimaglia,  leaving just Carter and Mayor Campbell alone to fight the good fight.   However,  all voted FOR this Taj Mahal.   There was no good fight.  Only folding like a lawn chair.

Add to this the fact that their favorite developer in town needed a parking garage for his development to succeed.  This is the master developer that has no agreement with the city that he is the master developer. He is what I would call the ‘convenient’ developer.  He was also the only property owner that refused to allow my campaign signs on his property – on University drive.   No other candidate was treated this way ever.  So he wins. He got his parking garage –  that grew from $4,000,000 in cost to $8,000,000 – after the election.  He offered to pay for the extra interest cost, but does not pay the bigger chunk which is the capital repayment.   No doubt he will conveniently receive the old city hall property, since it seems his influence on our city government and its politicians makes him a superman.

Now the city is going after money everywhere they can to that they will have enough in their budget to pay the mortgage.  We can expect increases in assessments for Fire and Police services in the disguise of a need independent of the cost of the city hall. Franchise fees will go up, that is, the fees that FPL, cable, ATT, pay to the city for selling services to us, which fees incidentally are passed on to us.  ( Franchise fees are taxes in disguise).  They of course are going to vote to get the industrial park into a district where they can hit the land and building owners for assessments.   Water will increase, park fees, property taxes, etc etc etc . The City even made a deal with Broward County to get 50%  of the rise in the sales tax that we will be voting on.  That’s right, everything bought in this city will have another 1/2% charge on it going to the $38 million city hall that we don’t need or cannot afford.

I have a way  you can tell the city that you are not going to take it anymore.

Vote for Karen Jones who is running against  Larry Vignola, the wanna be 10 year man ( 6 years + 4 Years =10 years …. I put the here so that Larry can add up the numbers properly ) .    We can VOTE NO to the sales tax increase for 6% to 7%  this elections in  November, and save the 1% burden  that Broward County and the City of Coral Springs wants to place on us in lieu of tightening their belts and fixing the mess they have created.

Hopefully the same 102 stupid people that voted against causing me to lose the election,  will come to their senses.  However you can’t fix stupid.

Weapons of Mass Hysteria Swine Flu Pandemic for Dummies
2009-05-01
I just landed at JFK on my way to Barcelona. As I am walking towards the gate, a man in...