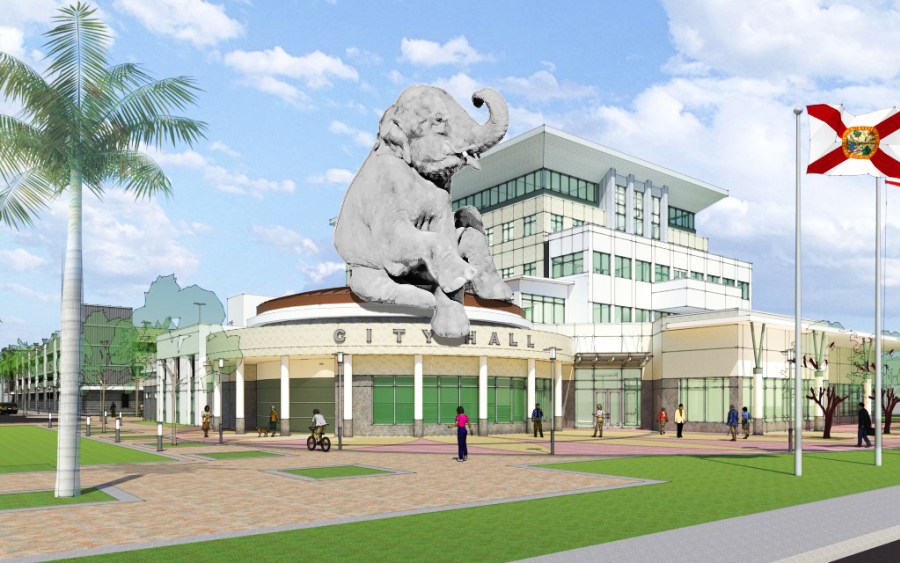 Back in September, I wrote an article providing factual information concerning the new city hall and taxes and shared two points:

The City Hall is over budget.
The City hall is behind schedule in its opening for December.

I also said that the increase in cost for this Taj Mahal white elephant will be a part of what we pay in taxes. Our commissioners do play pocket pool with our tax money shifting it around to make it look like increases in the millage rate was for other purposes, but make no mistake: the reason for increase in taxes is to pay for this glorious structure towering the residential area around it looking nothing more than a white elephant.

Originally estimated cost was $18 million with a $4 million parking garage needed to satisfy their own parking regulations, the $23 million venture kept growing over the last four years. The commissioners were taken advantage of by a smart local developer that was supposed to develop downtown Coral Springs and quickly doubled the parking garage upon a promise that the developer would pay the interest on the loan. The cost of the garage quickly increased to $8 million and the total cost then became a whopping $27 million.

The developer then pulled out of the deal last year, when he could not secure a cinema and promised hotel.

“Downtown” is now “What Town”

It’s not the first time the developer pulled out of the same deal. Downtown Coral Springs has been around a long time. The only developer to bid on the first one several years ago was not able to complete due to ‘economic conditions’ changing. The city changed zoning laws, set back requirements and gave the developer a lot of great stuff – including a lease for the development department when the city condemned their own building – the old Morrison Cafeteria. The city then signed a juicy deal with the developer to move the whole department to his building – where it currently is since the building is late. Then they worked with the same developer to push the concept of moving city hall to this new Taj Mahal instead of buying a building twice the size as the one they are building ( the black building on Unviersity refered to many as the “Darth Vader “Building ) with the promise of this elaborate Mizner Park style adventure – which is now costing the city, and us, $40 million and change.

Fool me once shame on you. Fool me twice shame on the city commissioners.

I have been told that not all is lost. The contractor that is late in building has liquidated damages against it under $100,000 per month. The city hall is now scheduled to open sometime at the end of the first quarter – which means by the end of March. So we may be able to retrieve $300,000 of the $40 million bringing the total cost down to $39,700,000 for a full $10 million or 30 percent over budget .

Fake news you will hear again from various city commissioners who are democrats that should know better than to use this language. No doubt one of the commissioners will say my figures are totally off…. it really cost us only $32 million for the city hall and $8 million for the garage….as they play with the numbers to make it seem that there is no big deal to being 30% over budget.

No matter. You elected these commissioners. Two of them ran on blocking this project. Three of them ran on that this building was the best thing for the city since swiss cheese. You have another chance this year to change the popularity contest of electing city commissioners to perhaps one that puts qualified people in charge.

Meanwhile, this structure is nothing more than an eyesore for the people living around it. It should never have been built and we should have bought the $11 million Darth Vader building that had five times the parking and three times the space of this $40 million white elephant.

Reform Immigration Laws To Make Easy To Do it Legally
2006-04-01  •  0 Comments
I am an immigrant to this great country of ours, and one that has entered this country legally and followed...
TRASH SECRET WASTEPRO NOT THE ONLY GAME IN TOWN FOR BUSINESSES Commercial Businesses Can Save 50%
2014-08-30  •  0 Comments
Coral Springs, Florida  04/08/2014 It is bad enough to see all of the empty stores, office space and a corporate...