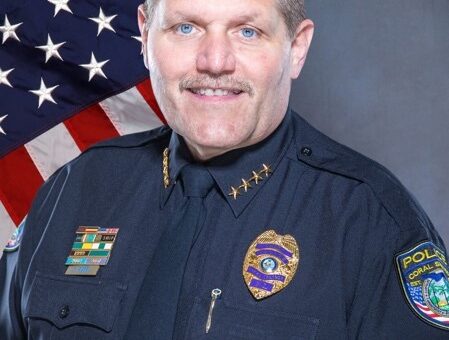 Coral Springs Fl : April 02, 2021   Every police department receives complaints about  their officers.  Most encourage the public to always come forward and provide them with the information. Recently the Coral Springs Police department received an unusual amount of complaints.  After the CSPD investigated the citizen grievances, body cameras worn by the officers exonerated them.

The Chief of Police, Clyde Parry , prides himself on a well run ship.   He is quite active in making sure the city fields the best officers.  We all know the bravery of the CSPD who arrived on scene at  MSD shootings in Parkland and without hesitation ran into the school building to save lives.  Broward County Officers did not.   The   Chief  was surprised and concerned  about the complaints received by a few citizens against his officers.

In  2019 the city commission approved the  $1.7M purchase of body cams for the police department.   Chief Parry in a news article by Jen Ruson on Coral Springs Talk ( Click here)   promoted body cams. He was certain  given the scrutiny of VIDEO, the cameras will  exonerate his officers  most of the time.  They would be  of extreme importance if an allegation if true.  Video replay as in sports, is used to make sure the call made was right. Bodycams give the same reply capability to make sure the right call is made.

I am quite sure at the time of this writing people are watching on the news the live video of the murder of Mr. Floyd in Minneapolis at the hands of one of their officers.  Body cameras are essential providing a historical record of any incident allowing the ability to check the facts.

Chief Parry, who sets a high level of expectation from his officers, along with his Command staff  extensively investigated the complaints.   They studied the body-cam footage from the officers in teh complaints  and  the facts exonerated them.  Nothing like the video tape to tell you the truth.  The complaints were unfounded.

“The allegation are simply not true. Detailed facts clearly did not occur.  I am not saying that the citizens were maliciously false or lying, but what they reported, did not happen.  I am aware that emotional involvement during an incident may cause someone to recollect facts differently than what actually occurred.  Different perceptions and perspectives can also make us see things differently.  That is why three different witnesses can give you three different versions of the same incident.”

Complaints must be taken seriously.   News media ( like ours as well) often jump to conclusions before the facts are investigated.  This results in a negative perception on the police and makes their jobs a little harder to effectuate even if allegations are proven false.  Chief Parry takes his departments transparency as crucial to the messaging needed for  the confidence of the public in his police department.   We can lose confidence when given unsubstantiated complaints which sometimes do not have the same transparency.

” False accusations also damage our department’s reputation and hurt our citizen’s perceptions of the valuable service we provide. ” stated Clyde Parry.  ”  I invite you into our department to discuss an incident, or view body camera footage, take me up on that offer.  I want to build trust and transparency with our citizens through open and honest dialogue.  I want you to know that when my officers are wrong, I will hold them accountable for their actions, but when they are right, I will defend them with the same vigor. ”  stated Chief  Clyde Parry .

I believe this offer to be genuine.

I would only add  we should not only complain when as citizens when we believe something to be wrong, but we should  also be there to provide praise when an officer does something right.  After all, we have low crime rates and this city is as safe as ever.

Based on our passed experience,  we already know we can count on our Coral Springs Police Department to be there when we need them.

I have no complaints.

– Howard Melamed , Chief of the Editorial Department of  Corlasprings.com

US PORTS SHOULD NOT BE CONTROLLED BY FOREIGN GOVERNMENTS
2006-03-01  •  0 Comments
The recent set of events concerning whether or not a company from Dubai should be in charge of running several...
CITY ELECTION MARCH 2002
2001-01-12  •  0 Comments
COMMISSIONER 'FIX' UPCOMING ELECTION BECOME LIFE TIME MEMBERS by Howard Melamed Section 4.09. Limitation on terms of office for commission...