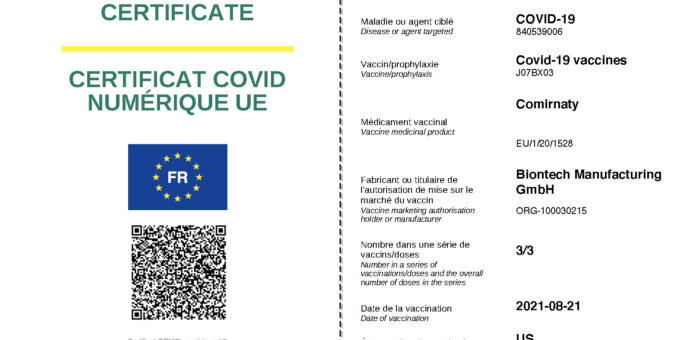 Tel Aviv, Israel,  10/23/2021 –   America  was isolated from the business world for more than 18 months and last year exports for our business were a fraction of the years before.  However, we live in a new era.   Vaccines provide a path forward and countries ( and states) that embrace the new reality will be the winners. The losers, are those that are fighting to keep things as they were in a world that is no longer as it was.

I am writing this article in Israel after having spent 5 days in France.  As a businessman that exports equipment manufactured here in Coral Springs Florida,  travel was always an essential part to increasing business.

I was given the opportunity to travel to France and Israel for business purposes to meet with current and future customers.   Planning this new adventure in the times of Covid-19 involved a lot of research.

For anyone to enter France ( even tourists) , you require proof of vaccination – which they readily accept our CDC hand written card.  At the same time, to enter restaurants, museums, and the exhibition I attended, there is a French Health site to go to to upload the vaccine card and passport information.

Once done, they issue you a ‘ Health Passport’ QR code that I showed to anyone asking.  Technically you needed to show this QR code to the restaurant you want to dine at, but no one asked for it.  Since my company was exhibiting its Coral Springs FLorida manufactured products at the USA Pavilion  at the MiliPol Exhibition in Paris,  I did need to show the QR code to enter the exhibition hall .  Nothing else is required in France. No testing before the flight to France.

To enter Israel, you need to fill out a Health form that attaches your passport information to a statement saying you’re ready willing and able to quarantine if needed in Israel.  This means you have a hotel , health insurance in case it is needed.  As well they tell you the latest requirements to enter which at the moment is  a PCR Covid-19 test in France, done within 72 hours of arrival to Israel, and a PCR and Serology test upon arrival to Israel, taken at the airport.

I did the test the night before I was to travel to ISrael from France. It was the Rapid PCR test , done at Charles De Gaulle airport for 70 euros. 2 hours later, I received the good word by email and SMS, that I was good to go.  Negative for Covid.

I also needed a special invitation by the Israeli government to enter based on business needs, which I applied for an received.   Both the PCR Test result and the Invitation were needed at check-in to the flight to Tel Aviv.

Arriving in Israel, was an experience in how we should be doing it here in Florida .

The PCR and Serology testing is done at Ben Gurion  airport.  There is a counter to pay for the test and provide you with a barcode.  There are two testing areas, with lots of nurses.  The line moves very quickly, everyone wearing masks of course.  They have plenty of people to help assist you, and provide you with information.   They have been doing this for a long time and perfected the art of getting you in and out quickly.

I did the PCR test first, and they attached a wrist band to me indicating I took the test. I would have the results in 24 hours, but the nurse told me that most likely within 11 hours. Under promise and over deliver 🙂

I went to the Serology test area.  I had done this test in the USA at Quest Labs, since I was curious if I had antibodies after 5 months of receiving the 2nd Pfizer dose .  In the USA, the test is done in the same way as a regular blood test.Injecting a needle into your arm and taking a few vials of blood.  Five days later they tell you the news. In my case it said I had antibodies.  That meant I already knew that the Israeli test would show the same.

However in Israel, they have perfected this test.   It is less invasive.  Instead of a needle stuck into the vein in your arm, they do a finger prick, which you don’t feel. A few drops of blood onto a 1” x2 “ test block and the nurse said wait two minutes and you will have the result.

“Two minutes?”  I thought maybe her English was a little off.  Surely she meant two days as our  USA laboratories, with all of their sophistication takes much longer.   Sure enough she was wrong.  It took only 1 minute.  The test showed I had antibodies.

I drove to the hotel, checked in as normal, and went to the room.   9 hours later, the PCR test arrived by email indicating  Negative for Covid . A few hours later,  a certificate from Israel Health department was received by email in hebrew. I took out my cell phone, went to Google Translate, took a picture and poof :  They are telling me that quarantine has ended, since Negative PCR and Positive for  antibodies.  Great.

I will go for a nice walk on the beach – breathing in the sea air – knowing that I passed the test.

No doubt I will ponder why in heaven’s name why we all are not promote the same healthy concepts as most in the rest of the world.  Instead politicians are fighting each other to see who can be the most left wing or most right wing.  In the middle is most of Americans who like me , just want to get us moving forward into the future.  We can learn how to do it from other countries that are already doing it.

Coral Springs F.L. = Mayberry N.C
2002-05-20  •  0 Comments
Which type of city  do you want? by Howard Malamud Revised 05/20/02 There are various reasons why you moved to...
TERRORIST ATTACK USING REMOTE CONTROLLED EXPLOSIVES CANNOT BE DEFENDED BY LOCAL AND STATE BOMB SQUAD
2006-04-01  •  0 Comments
USE OF JAMMING DEVICES BY LOCAL COUNTY AND STATE POLICE ARE DEEMED ILLEGAL BY FEDS by Howard Melamed Here is...