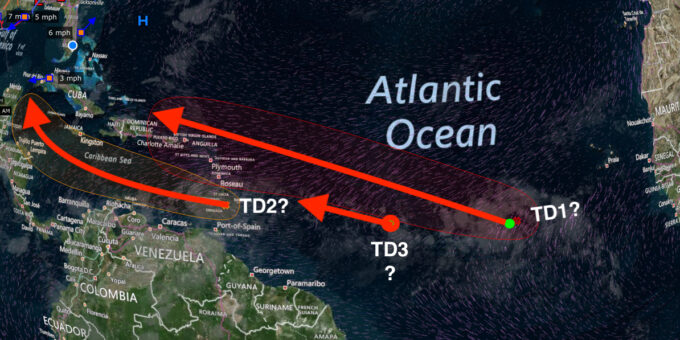 August 18, 2020 : Since we are all paying attention on other things like school openings, COVID-19 and the upcoming election, along goes two areas of weather disturbances coming into our neck of the woods.

Both have a 60% or greater chance of becoming a tropical depression, but the one that should worry us most, is the one farther out into the atlantic, and at least 10 days away from becoming a real concern. This one has the ability to strengthen and hit the northern portion of the leeward islands and may decide to continue toward South Florida. At this time, the storm is getting to be more organized, with a low level circulation already forming. The Jetstream winds are a little to the south of it, and looks like strengthening as well. I think this will be come TS Laura within by Thursday ( let’s see if I am right).

The other storm is will be heading to the central caribbean sea this week. If it starts to strengthen, this may take a north west or northerly track and hit the Gulf coast by mid next week. Hopefully wind shear will take its toll and knock it down a notch since that will be the only natural event that can stop it from increasing in strength. However it is heading into warm waters very conducive to tropical depression, and then rapidly turning into a tropical storm. I think this will be MARCO.

Meanwhile, let’s keep our eye on whether any one of these two storms end up becoming a major hurricane, since this is the time of the year.

BTW : There is another circulation happening between the two of these storms, but who’s counting.

August 14,2020 12:00 pm. Hurricane Josephine – Tropical Depression Not a THREAT the Sky is not Falling. Looks like Josephine ( from the Beverly Hillbillies ? ) is going to make a right hook similar to my golf swing and head out to the ocean. Will archive this article….

August 11,2020 11:PM : Time to pay attention to two storms in the Atlantic , one of the about to form into a tropical depression within 24 hours, and then a tropical storm – to be called Josephine. Satellite imagery of this storm, indicates a low level circulation already formed, with the jet stream circulation still to close the circle. Large area of convection and a tighter smaller stronger convection area already exists. So far this path brings it into our area around August 20, and plenty of room to pick up wind speed. This may form into a Hurricane within the next 5 days, although the National Hurricane Center is still forecasting a tropical storm during that time.

The 2nd storm is now coming off of the west coast of Africa with a strong circulation already forming. One to keep an eye on.

When Buckling Up Is Not Enough KIDS AT RISK
2002-02-12  •  0 Comments
By Cindy Heafy , Community Involvement Coordinator, Coral Springs Police Department Many parents assume that their children are riding safely...
United States Immigration and Naturalization Service
2001-09-15  •  0 Comments
Terrorists Welcome: All others Line up and Wait INS is the 'Weakest Link' in protecting the United States by Howard...