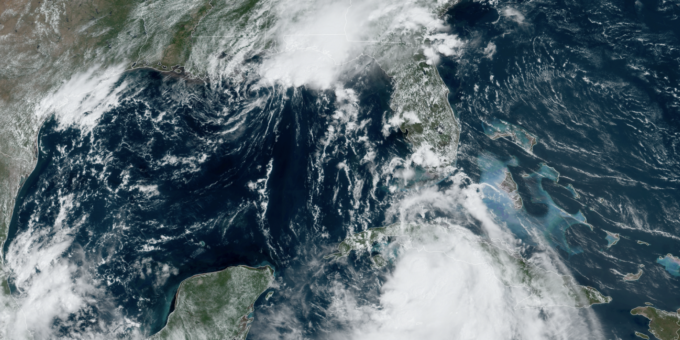 August 24, 2020 : From what the NHC is telling us, Laura will miss us and MARCO never made it close. Four storms, and all misses. That is the record South Floridians want to see continue. We like baseball, but we do not want any strikes. Only balls. However it is difficult for us to pray that any storm should miss us, when the result is someone else will get it.

I can tell you that the 3-5 day forecasts are getting a little better. The 5 day is still problematic. As well, the NHC cannot provide an accurate intensity forecast. With a scale of 5 categories, it is easy to say CAT 1 and be off by 2 to CAT3 and visa versa. Tracking with modelling proves more accurate at 4 days, but past that can only be accurate if the storm has fully developed into a hurricane with a defined eye.

August 22,2020 : 14:00 NHC’s guidance is all over the place, as drastic changes to their forecast is happening between broadcasts. They now put the two storms 2 days apart from being in the Gulf Of Mexico. This means that Fujiwhara will have to wait another few decades for his namesake condition may be possible again.

Although we are not yet out of the woods, what we are in store for is a lot of rainy weather as both of these storms command a wide area of influence.

Let’s keep an eye on Laura, and see if the NHC changes the expected path which is now well south of us.

August 22,2020 : 00:01 Everyone needs to pay attention to the following : The NHC modeling process never took into consideration two Hurricanes churning within a few hundred miles of each other. That is what is going to happen if the modeling is accurate, early next week.

The Silence from the NHC only indicates how they are concerned about this. Will the two hurricanes merge and hit New Orleans at the same time, or will they hit one day apart? That is if one hurricane does not push the other into another direction – perhaps turning Laura into South Florida.

When two hurricanes come in close proximity to each other, you may get what is know as the Fujiwhara Effect. The two storms start to dance , actually orbiting each other with their centers coming closer and closer together until they finally merge. Right now, Laura and Marco will be in this position late Monday early Tuesday.

No one knows what effect this will have on the forecast, and if you are in the panhandle area, I would start looking at possible evacuation.

As with COVID, this may be a one in a lifetime event since the last time this happened, was in 1921 when two cyclones merged , and a scientist named them after himself – FujiWhara.

August 21,2020 : 8:30 am: Everyone in South FLorida should be treating TD13 as if it will become a Hurricane before coming into our area. That is because this storm seams to be baffling the NHC in coming up with a clear statement as to its potential and its path. The one thing that is certain, is something will hit us sometime Monday. We will know by Sunday night, exactly what and where.

What is certain, is that TD14, located South of Yucatan will become HURRICANE LAURA beating our TD13 for the name. So we need to be watching for. TD13 to become MARCO .

There is still a strong probability that we will see a 1 in 60 year event with the two tropical systems heading in the Gulf of Mexico and will be in proximity to each other cones and all at the same time. This remarkable and dangerous event, can lead to a merger of the two creating the Perfect Storm in the Gulf of Mexico late Monday, Early Tuesday Morning.

Is this likely ? Who knows, and definitely the NHC has this as a possibility. We have never been in a situation where two tropical systems – Hurricane Laura and Tropical Storm Marco, may occupy the same area. Will one cut the other down, with they combine – will one push the other ? My thought is that MARCO will influence Hurricane Laura and move it further to the east – which is not good for us.

As predicted , TD13 has now come about, and by tomorrow night, TD with become Tropical Storm Laura. However, as the National Hurricane Center has said in their latest discussion, this storm is unpredictable. In fact, if you look at the guidance models, most have this turning into a Hurricane within 96 hours – and by next week – in our backyard. They are predicting Monday, but this storm will slow, and we can figure this to be a mid-week event. One model has this becoming a CAT4 !

The question to ask : WHY IS THE NHC HOLDING BACK on giving us the right information for us to prepare. With no systems to slow Laura down, and plenty of warm water to give her a lot of energy, they must believe Hurricane Laura will be in our area either as a CAT2 or CAT3.

According to Forecaster Canglialosi, (Graduated U of M 2004 MS Meteorology):

“The environmental conditions appear generally favorable for the depression to strengthen, with the wind shear expected to remain relatively low while the system moves over warm SSTs and remains in a moist air mass. These conditions should promote gradual strengthening and it seems quite likely that the cyclone will be a tropical storm when it moves near or north of the northern Leeward Islands in a couple of days. The bigger question is how much interaction will there be with the Greater Antilles. If the depression moves on the south side of the guidance envelope, further strengthening would be limited due to land interaction. Conversely, if the system gains more latitude and moves north of these highly topographic islands, it could have the opportunity for more significant intensification. The NHC intensity forecast, which is of low confidence, is roughly near the middle of the guidance envelope.”

What’s he saying ? “I am taking a guess here, and covering my behind in case it gets worse. ” He knows that if he says ” Hurricane” everyone here will start buying up plywood, tape ( for the ‘winda’s ) and lower the level in their swimming pools. They would start the run on toilet paper, but that already happened with COVID-19. According to Governor DiSantis, if you put plywood on your windows, and start preparing, then the Hurricane is going to come here for certain. Don’t put up the panels, and no Hurricane. ( He says the same deal with testing….the reason Covid is infecting so many people is because of testing. ) With so many people in the Federal government denying science, it is no wonder John “the Kid” Cangialosi is afraid of telling them true science. It’s like playing tennis without balls.

I miss Max Mayfield. He was the Director of the National Hurricane Center and was around for the worst storms of the century including Hurricane Andrew. Max never minced words or sugar coated anything – he told us what was coming, and stood by his forecasts – which for the most part were always close enough. He personally called the NEW ORLEANS mayor to tell him how bad Hurricane Katrina was going to hit and Mayor Nagin made sure to evacuate as many people as he could – while the Governor waited to see what was going to happen. Thousands of lives were saved – because Mayfield acted. Max would tell you to prepare the worst and the worst has not come yet. Instead, ‘conservative’ minded forecasters are holding back , fearing backlash from government , FEMA who would need to start preparing now for any catastrophic event on the area. That costs money. Need a say more.

Removing Sheriff Israel or Any Elected Official by Florida Governor is Dangerous and Un-American
2019-02-02  •  0 Comments
Our Democratic process is at stake yet no one is protesting. Newly elected Florida Governor Ron DeSantis , a Republican,...
POLICE FORCED TO TICKET CORAL RESIDENTS Secret Policy of Police Department requires 3 tickets per shift per officer
2004-02-22  •  0 Comments
- by CSPDCOP ( editor's note: CSPDCOP is unknown to us, but other sources within the police department have not...