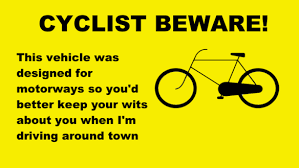 Coral Springs Florida – Feb 1 2021 : In a young community like Coral Springs, we would expect getting on a bike to cycle around the city would be easy. Surely there are bicycle lanes on the main streets, and several paths you can enjoy the park areas and canals that are highlighted in our city. Would you not expect it would be safe to cycle to the Walk for instance or even city hall ? As a new cyclist, the answer surprisingly is: this city is not safe for bicycles.

I decided during this pandemic to exercise by riding the bike to work which is located in the Coral Springs Corporate Park, a mere 3 miles away from my house.

I purchased a SWAGTRON cycle on Amazon , which several of my friends say was cheating since it is also electrically power assisted. I pointed out it is a normal 7 speed bicycle with 3 separate speeds assigned to the motorized hub in the center of the back wheel. Pedaling at speed 7 and kicking the motor into gear increase my speed to 17 miles per hour, allowing me to arrive at my office in less than 15 minutes – unless a hit something along the way or the stop lights slow me down.

Cycling on Wiles Road is no picnic. There are no dedicated lanes of any size to safely accommodate both motorist and cyclist. Police recommend you use the pedestrian sidewalk, and share it with those few people that decide not to take their car and walk or run. This proves to be a challenge by itself, since the sidewalks cannot safely accommodate both cyclist and pedestrians.

My first experience cycling to work was interesting to say the least. I started in the Running Brook Hills area and turning left onto Wiles Road westbound I decided to use one of two lanes of Wiles Road instead of the police recommendation of the asphalt sidewalk. . Staying in or on the right lane obviously and why not since I pay my taxes too, I pedaled away ( of course I did not engage the electric motor).

Several cars passed me quickly in the other lane and the car behind me beeped twice at me perhaps thinking that roads were only made for motorists. Passing Betty Stradling Park , I entered the school speed zone of Coral Springs Middle School – with the flashing light of some color either red or orange or green ( I am colorblind so the key to me is it was flashing ) which meant to reduce my speed to 15 MPH since I did not want to get 12 points and a ticket from the Coral Springs Police Traffic department motorcyclist on the Harley Davidson located on the right side at the entrance to park.

Scotty: Captain Captain – It’s the engines sir. Their burrrrning up!

Scotty: Aye Captain. I will give her all we got and a We Bit More.

It was easy to keep up with cars in the school zone who need to travel at 15 miles per hour or risk a ticket. Not me! Ratching my little bicycle bell , like I was the Good Humor Ice Cream Truck, startled the motorist in the car in front of me as he did not expect a bicycle wanting to pass him.

I was now in ELECTRIC MODE and traveling at a swift 17 miles per hour, 2 mph over the posted speed limit for a school zone. I waived at the motorist who was now looking through his rear view mirror at me, whilst looking at the police officer at the side of the road pointing a radar gun at him. Finally, he did the right thing and moved over to the middle lane from the right lane.

While passing him at 2 mph faster, I waived at the Coral Springs police officer who’s radar no doubt went right through me. I was technically invisible. The traffic cop seemed unimpressed with my illegal 2 mile per hour encumbrance of the speed limit law. He knows as I do, no judge in the world would convict me of the 2 mph infraction. It would require a lot of paperwork for him to fill out if I decided to contest. More of a concern to him is that it would trigger taunting by his fellow police officers as that would no doubt haunt him for the rest of his life.

“You gave a speeding ticket to a guy riding a bicycle in a school zone? Who was he – Lance Armsring? “

Too much paperwork and grief is what a police officer does not need for 2 mph.

After the school zone, passing Coral Springs Drive I continued on the law enforcement approved sidewalks made sometimes out of concrete and sometimes paved asphalt. If you are on the paved asphalt, the ride is not smooth. Roots from trees have created challenging humps in the path uplifting the not so friendly black tar, that not only give me a good jolt but provided me with a certain discomfort to my rear end. I can say it was not pleasant sitting on the tiny , not made for me, sized leather unpadded seat that the bicycle came with. You would figure that the wheels have rubber tires as padding so why not have the same material on the seat supporting my ass? Go figure.

The path transitioned from bumpy asphalt to bumpy concrete sidewalk. This was no better since a crack every 5 feet on the sidewalk translated to hurting my crack every five feet due to the uncomfortable seat. ( Sorry, I had to say it ).

I cycled passed Publix, Costco and the 7-eleven on the corner of Wiles road and Coral Ridge drive. Along the way I dodged those pesky pedestrians who also did not appreciate my little bell ringing annoyingly at them to move over. Brrrring Brrring.

Every so often I needed to duck down since Coral Springs Public Works department or whomever they contract to cut shrubs and grass, did not cut low hanging tree branches that came ready to slap you in the face…. which one of the pedestrians tried to do to me as well after I startled her by ring my little bell on my electric bicycle I was pedalling for exercise . Brrrring Brrring.

It’s no fun having to hunch over and dodge the low hanging wooden sticks while at the same time getting a vertical jolt into your coccyx from the very same tree that is causing a bump in the road directly beneath. (I thought that for a microsecond this attack by the trees maybe part of a conspiracy to take over the government ? The thought quickly vanished) It does take some coordination and skill which of course I possess having been able to ride this electrically assisted bicycle so safely on the sidewalk sitting on a uncooperating leather seat.

The End of the Road

Once you cross Coral Ridge Drive, the path abruptly ends 100 feet west in a drop in elevation into bushes , brush, snakes and mean ducks. (I wondered: Who is the idiot that designed this? ) This forces you back onto the road, not recommended by the police, one lane in each direction with no room for a car and a bicycle to share at the same time. Simply put no one planned to have a sidewalk or any pathway continuing into the corporate park from any of its entrances, since no one ever thought anyone would ever cycle to a business in the Coral Springs Corporate Park – the “Premier Place to Live, Work and Raise a Family”.

Pedaling as fast as I can in a mad dash to safety past the FPL main electrical power station , and a building which used to be a Harley Davidson store, which sold real motorcycles that can travel faster than the car now beeping me to pull over. 17 mph was simply not fast enough for him. ( he doesn’t have a small little bell like I do ….brinng brrrring)

I made a left turn onto 121st street, followed by a right turn into the alley behind all the buildings fronting Wiles Road. Cycling along the canal I needed to be cognisant not to run over environmentally protected ducks waddling across the alleyway quacky with anger at me, for some reason. They did not like the bicycle bell either or perhaps they also thought that having an electric bicycle is not true exercising. Brinnng Brrrrring.

I finally make a left turn onto 124th street – into our parking lot and arriving safely at my office.

Dismounting my bicycle and walking like I got off a horse, waddling through the front door I pondered why Coral Springs the “Premier City to Live and Raise a Family”, does not have bicycle lanes like normal cities do.

Perhaps I will drive my Tesla to work from now on.

CYCLING THE SAWGRASS LEVEE FROM ATLANTIC TO LOXAHATCHEE ROAD: 10 Miles of Pain and Suffering.

Columbus Was an Idiot
Holiday or Not!
2021-10-10  •  1 Comment
Columbus Day should be the  holiday to remind us just how stupid we all really are.  Just think: we are...
CSPD POLICE BLOTTER : CRIME DOWN – OFFICERS HEALTHY
2020-05-05  •  0 Comments
In a public records request, we had asked the City of Coral Springs Police Department for a list of crimes...