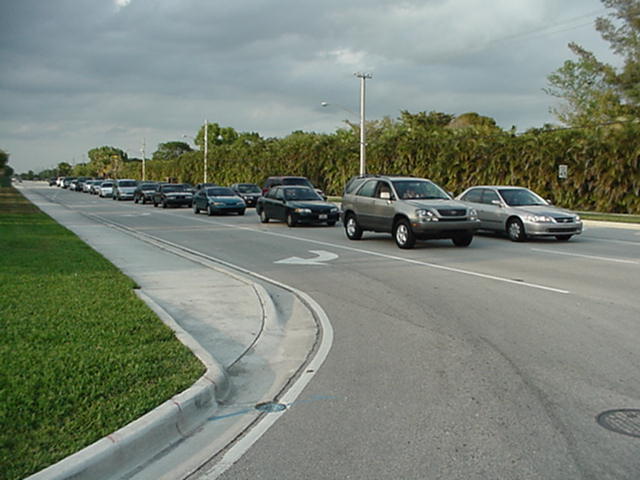 Summary: Broward County has refused to place a traffic light on the corner of 39th Street and Coral Ridge Drive. Among some of the reasons is that there are not enough accidents. 5 required, only 2 have taken place.

In case you are unaware, most of the major streets in Coral Springs are county roads. The traffic lights, signs and pavement are installed and maintained by Broward County. The public safety on these roads are their concern and as a result part of the taxes that we pay go towards the improvement that they provide. In order to have a traffic light installed at a specific intersection, you have the hard task of persuading the Broward County Traffic Engineering Division. Even though the corner may have a large volume of traffic and common sense would indicate that it would be in the best interest of public safety, the county still has to do their study and make the decision. This was the case with 39th Street and Coral Ridge Drive.. 3 years later, and the ‘red tape’… Broward County’s decision was No!

The decision has angered Bernard Moyle, the chairperson of the Coral Springs Economic Development Foundation, who for the past 3 years has been trying to get a traffic light installed at that intersection. With nowhere else to go, he decided to write a letter (enclosed below) to Senator Walter “Skip” Campbell, concerning this traffic light and the refusal of Broward County to place one there. It is quite obvious from the letter that Bernard’s frustration with the Broward County Traffic Engineering Division has forced him to take the gloves off and try all that he can to make this city safe.

We spoke to John Clark, Traffic Operations Engineer of the Broward County Traffic Engineering Division about this particular issue. He has given us the letter that he wrote to the Coral Springs City Engineer, Louis Aurigemma (enclosed below). As far as he is concerned, there is no need for a traffic light at that intersection , and he has the recent study to prove it. However, he does say that his job is only to inform the department of the facts. Rarely, (only 2 times in 5 years) does the Broward County Commissioners overrule the department and force an installation. Otherwise, as he says, it would snowball with personal or political interests getting in the way of proper decision making. In his letter of February 11,2000, he stated that only when there are 5 accidents in a twelve month period at an intersection, would a traffic light be warranted.

He is fully aware of the Broward County’s decision and is utterly amazed at their stupidity.
“After all” he said, “the reason that there is not more accidents at this corner is because I’m here and the police have been at this corner for the last few years. Broward County’s study indicating that there were only 2 accidents in the past 12 months proves we need something (or someone) to protect the public.” No wonder Broward County’s study didn’t show more than 2 accidents….there is a Policemen there!!!!
Makes sense doesn’t it?. How come Broward County didn’t take the fact that a policemen was at the corner every day protecting us and preventing accidents into consideration when making their report? It would seem logical that if the policeman wasn’t there, there would be many more accidents than even the 5 they are looking for.

(NOTE: ATTENTION BROWARD COUNTY TRAFFIC ENGINEERING DEPARTMENT. Check out whoever did the study for you, and make certain that they actually came out to the site. You don’t want to look any more foolish than you already look. Good thing you guys aren’t elected officials. There is still time for you to make the right decision here.)

As you may or may not be aware, engineers are given the hard task of setting design guidelines based upon economics, probabilities and statistics. Without the guidelines there would be no way in determining how safe to build a structure, how big to make a dam, and similarly, how many accidents are required before placing a traffic light. However, authorities can make the sound determination to disagree with the engineer’s result, only if the decision is safer than the design parameters.

Similarly, it makes sense to place a traffic light along Coral Ridge Drive between Sample and Wiles. If you have seen this stretch of road, you can know that Coral Ridge divides the residential section to the east with the industrial section. Not one pedestrian crosswalk exists there and no way exists for pedestrians to cross this road legally without having to go a significant distance to the nearest traffic light.

Who decided 5 accidents is the criteria? Why not 10 or 2? Obviously, it wasn’t the person that was one of the 2 accidents last year at 39th and Coral Ridge Drive.

Perhaps what we ought to do is to gather the Citizens of Coral Springs, and stage some sort of demolition derby at that intersection, in order to bring the accident count above 5. With the controlled accidents, we can be assured that no one else would get hurt and unlike Broward County, we wouldn’t be waiting for the other 3 accidents to happen.

What really is of concern is that Broward County reacts to situations rather than acts. They should take a pro-active approach with this matter and place the traffic light where common sense would dictate. Not only at 39th and Coral Ridge, but how about along some of the dangerous corners on University Drive. Let’s divide up those long stretches of road like Atlantic Blvd. between Coral Springs Drive and University Drive, where some motorists use it as a way to test the speedometer. Let common sense prevail, and engineers….well let the Broward County Traffic Engineers, cross the street at 39th and Coral Ridge Drive.:>

For your information, we provide you with 2 letters that we have been given permission to publish. First is Bernard Moyle’s appeal to Senator Walter Campbell, followed by the letter sent to the Engineering department of Coral Springs, by John Clark.

With Bernard Moyle’s permission here is his letter to Senator Cambell:

Re: Traffic Signal-Corporate Park of Coral Springs
Our File No. 95-097

The Coral Springs Economic Development Foundation, Inc. (EDF), a full-service, not-for-profit economic development company providing an array of development and financial assistance to corporations relocating to or expanding in Coral Springs, is in need of your assistance.

For the past three years, we have worked within the system to secure a traffic signal at the corner of Coral Ridge Drive and NW 39 Street, the main entrance of the Corporate Park of Coral Springs. The traffic signal is critical to ensuring the safety of the ever-growing number of employees in the 490-acre Corporate Park of Coral Springs. Our efforts have met with great disappointment.

Due in part to the EDF’s effort, the Corporate Park of Coral Springs has experienced major growth over the past few years welcoming such companies as Audio Intelligence Devices, Alliance Entertainment, Allied Extrusions, Brock Supply, Unipower Corporation, KB Electronics, Fastbolt Florida, AquaCare Systems and First Data Merchant Services to name a few. In order to further enhance our tax base the EDF has assisted Pan American Group in purchasing the remaining 125 acres in the park. Pan American specializes in developing corporate parks. Thus development and consequent trip counts will grow exponentially.

Skip, the City of Coral Springs and the EDF have taken a proactive approach to protect the lives and property of the people of the City. Frankly, sometimes a two to three year old study (The Broward County Traffic Engineering Study) just doesn’t tell the story. When I was about 10 years old I watched my childhood friend, Tony Hughley, get dragged to death by a car that sped through an intersection that “didn’t require a light.” Who’s little buddy, playmate, child Senator Walter G. “Skip” Campbell or parent has to be killed now…? The Traffic Operations Engineer states in his letter: “The accident warrant for installation of a traffic signal requires a minimum of five accidents in a 12 month period…[there have been only] two accidents in 1999 that would be considered to be correctable by a traffic signal.” Skip, when the accidents occurred we–the EDF, the City of Coral Springs and the Council of Executive Officers took action to prevent accidents by posting the traffic patrol.

Do you think . . . for even one minute that the City and the Economic Development Foundation would spend $3,240 per month for a traffic patrol if it weren’t warranted? Please help me convince the County to stop “studying things” and where warranted – as here – take action. WE WILL EVEN PAY FOR PART OF IT. Help us be proactive to need as opposed to reactive to disaster.

The pertinent background material is enclosed herewith for your review. Please let me know how I can help.

And here is a copy of the letter dated February 11,2000 from the John Clark P.E.

CORAL SPRINGS, FL – The Festival of Trees is coming back to Coral Springs Center for the Arts – a… [...]

Fifteen years ago, my six-year-old son Chansen was diagnosed with cancer. What followed was a whirlwind of emotional and financial… [...]

A local free press is essential to a healthy democracy. It’s as true now as 230 years ago when the… [...]

Delray’s massive Christmas tree rises 100 feet. Here’s when its thousands of lights will go on.

Delray Beach will kick off the holiday season with one of its most popular, annual attractions: the lighting of its… [...]