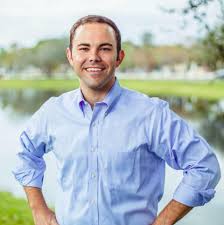 Coral Springs Fl. , Feb 8 2019 : Continuing to haunt Dan Daley who is now running for Florida  State House Seat District 97 as a Democrat, is an issue involving the Coral Springs Police Department’s decision not to administer a DUI test to him at an incident – even though a police officer at the scene indicated that it was needed.

At 5:22 am the morning of September 14,2017, Commissioner and Vice Mayor ( now candidate ) Dan Daley had a flat tire that inexplicably triggered the dispatching of an EMS unit,  and prompted the participation of 6 Police Officers, a sergeant, a lieutenant, the Acting Police Chief, the Assistant Police Chief, the City Manager and the Mayor. No DUI test was performed.

This all came to light when one of the Coral Springs Police Department Officers,   Stephen Wetherington,  sued the City of Coral Springs under the Florida Whistle Blowers Act  claiming  that department officials conspired to hush the incident up,  given that the individual involved was the Vice Mayor and City commissioner of Coral Springs.

Officer Whetherington was subsequently demoted, and reprimanded in his insistance that our laws be applied impartially, even with city officials. The City had filed a motion to Dismiss, without disputing the DUI allegation against the Vice Mayor. The motion was denied , and the case is moving forward.   The case is still before the courts, and you can follow the current dispostion at the Clerk of the Courts records click here  and in the search box place : CACE18015777

Here are the details:

According to The court record initial filing of case # CACE-18-01577  ( click here for a full copy ) on Sept 14, 2017 Officer Wetherington off duty at the time overheard a radio call about an unconscious driver behind the wheel of a car nearby.   Wetherington  contacted one of the officers on the scene and found out that the unconscious person was in fact  Vice Mayor and City Commissioner  Dan Daley.  Apparently when Officer Wetherington arrived other officers had already dealt with the incident, by not arresting the Commissioner and simply towing his car from the scene. While learning this Officer Wetherington put his finger to his lips and made a ‘sushing’ sound indicating that the officers on the scene were covering this incident up, and as he put  having ‘ No Balls”.  ( the City of Coral Springs unrefuted this ). A copy of the memorandum which is part of the court record describes the incident as told by Officer Wetherington is below :

At that time, and stated in the court records, Officer Wetherington was a five year Coral Springs officer  and Officer of the Year ( click here for Coral Springs Police Website with Officer of The Year) He is only one of six police officers in Broward County at the time of the incident, that is certified as Drug Recognition Experts and specializes in DUI investigations and was one of the reasons why he swung by to the scene when he heard the call.

Officer Wetherington is seeking back wages, compensatory damages, to be reinstated in his position, and cease further harassment by the city.  The City of Coral Springs filed a Motion to Dismiss and Strike Claim on August 8, 2018.

According to a memo from the assistant city attorney to the city attorney dated Sept 28 2017 titled “ Inquiry to Assist EMS Call concerning Dan Daley”(click here to view) ,   at 5:22 am on September 14 2017, the CSPD received a call from AAA  tow truck operator  ( who arrived to the parking lot located on University and Royal Palm).  The tow truck operator was concerned that customer who called her  was “Unconscious and Unresponsive “ . EMS was dispatched and CSPD was notified who sent an officer to assist EMS.  Officers began to arrive at the scene.   According to her memorandum , the first officer on scene indicated to dispatch that  the person in the car was in fact Commissioner Dan Daley  who was at that time behind the wheel of the car. Shortly after two other officers arrived , and then one made a call to a sergeant and Lieutenant Neese.  Then Deputy Chief Parry was called and briefed by Lieutenant Neese, who then called Chief Backer and briefed him.  According to the memo,  Daley  refused EMS and said that he had hit the curb with his car. ( note: University Drive or Royal Palm blvd , we are not sure which but both are large streets and a curb is difficult to hit unless of course the car veered out of control ).  Other memos indicate that the Mayor and City Manager were both contacted and briefed ( woken up as one put it).   Parry indicted to Neese that the DUI test was discretionary ,  and Neese made the decision not to perform it.

According to a few officers,  Daley was not intoxicated. However,  according to Wetherington, a certified expert in DUI recognition , a test should have been performed.

In speaking with people that know Dan, they mentioned that this was a nothing burger, and Daley had told them that he was just in a deep sleep and not intoxicated claiming that as a deep sleeper, nothing will wake him up. ( Banging on his window by the tow truck operator who made the call, cell phone ringing, bright headlights beaming into the car, and flashing blue strobe emergency lights – was not enough )

Several questions come up following the review of the information supplied by the city.  The main ones are:

One may question Officer Wetherington professionalism concerning joking about the incident ( voice mail according to a memorandum), insubordination in the way in which he spoke to the lieutenant, and perhaps the amount of overtime hours he has racked up tracking down DUI victims at night  and representing the city during the daytime in court.  The reprimands by the city  deal with this fact and he was disciplined for the way in which he treated other officers.  However, the whistleblowing part  involves  then Commissioner Dan Daley, who is now running for State House Seat , and shines a bright light on a potential cover-up and favoritism for elected politicians of this city.

It is important to note  that in the city’s Motion for Dismissal , they never allege that the incident described by Officer Wetherington was not as he stated in his complaint. Only that the high bar under the law was not met for Whetherington to be called a true ‘whistleblower’ , and that he was reprimanded for the way he conducted his communication with other officers.  All the city had to do to end the Whistle Blower court case was to claim that there was no event – no DUI Dan. If there was no DUI, or possibility, there would be no whistle to blow- A Nothing Burger. Perhaps the city can’t do that since they know there is a possibility that Dan was DUI, given the statements. If there was a chance that he was, then the officer in charge should have given the DUI test. The city only claims that the whistle blower cannot be one, since he works for the city.

I am not sure why all of this was kept quiet.  If it was to protect the political official then all of this public information would be used to attack him later on, or submit him to blackmail – or there are other similar issues that may have taken place on his behalf or to other city officials.

Dan Daley was elected as City Commissioner despite this situation and is now running for Florida House Seat District 97. Does he meet the high moral and ethical standards we demand of our elected officials ?

Or, is it possible that Dan Daley was intoxicated that early September morning , or was he simply too tired to drive? We may never know because certain officers on-scene decided a routine roadside DUI test was not necessary, against the advice and recommendation of their certified drug recongnition expert, Officer Stephen Whetherington.

﻿Editor’s Comment : I have received a lot of email that claim that I am anti-Daley, and all of this is FAKE news. No one has yet disputed anything that I have written, which I have done the research and presented you with the facts above. It’s amazing the people consider Dan the golden child of Coral Springs, including Coralspringstalk – and refuse to look at the facts, and follow the leads. Even Sun Sentinel has not followed this case up. This is not helpful for Dan’s career, as he should have come forward and at least provided a plausible explaination to what happened. Clear the air, or accept the responsibility that he could have that morning killed someone with his car if he was in fact driving under the influence. Instead, as he will no doubt rise the totempole of politics, one day all of this will come back to haunt him, instead of accepting responsibility for his actions

(Note : this article was revised and updated from an article first published in September 2018) .