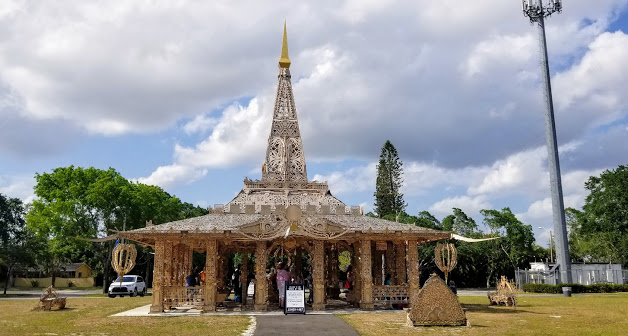 Coral Springs FL: On Sunday May 19th, the Temple of Time is to succumb to a what the city labels as a Non-Religious Ceremonial Burn. The piece of art is a creation of artist David Best who was selected by the City of Coral Springs, the City of Parkland and the Coral Springs Museum of Art . Not selected for any religion or religious beliefs, Best’s pieces are constructed with Community Cohesion in mind and set fire as they are temporary structures.

You can look at the video that was created showing the construction and Best’s commentary by clicking here :

Best describes the temple as one step in the healing of the community who suffered a tremendous loss on Valentine’s day last year ( 2018) when students and staff were murdered by a 19 year old with a gun at Marjory Stoneman Douglas High School in Parkland Florida.

This non-religious art has some religious implications even though the City wants to emphasis the contrary. Many people believe that when this temple is burned to the ground, their emotions will be lifted and may lessen the pain and suffering for those families that lost loved ones at the MSD shooting. Best in his movie goes out of his way to make sure that people understand that this is not ‘Healing’ . Nonetheless, people believe it is part of the process. Healing of one’s’ spirit, has always been associated with religion.

The city in an email to Coralsprings.com , recognizes that some religious people and established organizations might have taken this process the wrong way, which was not their intent. However, when the Temple is burning, many people in our community may be affected in other ways, bringing up bad events of the past and present. Burning of a Temple associates with synagogues burned down in Europe during the holocaust. Burning of Churches here in the USA on the past, even as recently as last month , where 3 churches were burned by an arsonist with hate in his heart towards Blacks. Cross burnings – and even Idol Worshiping all revolve around burning . Burning anything for purposes other than an bonfire for fun, has always had negative implications in our history. I am not suggesting that the Temple of Time is anything else other than someone or some people wanting to something good with something bad. However, symbolism can be taken different ways. Will the Temple of Time ceremonial burn be any different ?

Since the Marjory Stoneman Douglas High School shootings, students from other schools have been murdered or injured by some kid getting access to guns they should not have had. Copycats . This Temple of Time has stood by and witnessed this in our country, as we have done little to prevent any more killings. A lot of words, a lot of symbolism, but no real action.

Define the moment as more than a symbolic event. At the bonfire on May 19, ask yourself what has been done to stop the killing of children during the time the Temple of Time has occupied the spot on Sample Road . Have we as a community pushed our politicians to pass legislation to stop a 19 year old kid from getting a gun ? Have we done anything to move the debate of gun control passed those that stand in the way of common sense regarding semi-automatic weapons? Are our children more safe at schools with more guns rather than less guns, since politicians have passed legislation to allow teachers to carry weapons, as if that will stop someone from shooting in a school in the first place ?

Nothing will change when the Temple of Time burns, until we move off such symbolic gestures as being a solution to anything. they only remind us of what happened. Let’s hope that while you watch the non-religions ceremonial burn , a religious flame of spirit is ignited promoting a sense of responsibility to make sure no other child is murdered in schools in this country.

On May 19, Sunday, weather permitting, when the Temple of Time burns to the ground – reflect on what more we can do as a country to prevent killings in schools – and then – let’s do something about it.