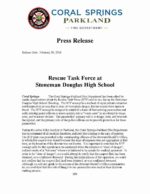 More and more the active shooting  and murder of 17 adults and students at Marjory Stoneman Douglas High School last week is showing the incompetence of the Broward County Sheriff department.

We now find out that first aid to the victims was delayed by BSO. 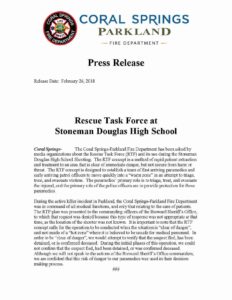 According to the press release put out by the Coral Springs Fire Department RTF Press Release Click Here who were the rescuers first to arrive on the scene to apply treatment to the wounded,  the Broward County Sheriff commander on scene refused to allow them to enter the school since they could not determine if the killer was still in the building.  The apparent protocol set up requires  that they know either that the killer was  apprehended or known to have left the scene before allowing unarmed paramedics to help the victims.

The delay in  BSO entering the building as soon as shots were fired,  resulted in confusion by BSO as to exactly where the shooter was.   Added to further delays to the paramedics starting their life saving capabilities to the injured students and faculty,  BSO were using the school camera system to locate the shooter, which for some reason they did not know was 20 minutes delayed.  The video they were seeing of the shooter, in fact was 20 minutes earlier. We know now that  the murderer  already had left the building shortly after he stopped shooting, and was with the evacuating students, undetected.

The combination of the delay of  BSO in entering the building and their use of the delayed camera system postponed  the Coral Springs Fire Department from immediately applying  first aid.  Crucial minutes lost.

I do not want to even think as to what could have happened had :

a) BSO officers that stayed outside while the killer was shooting had gone in at the time the first shots were heard.

b) Had the Paramedics been allowed to apply first aid to the victims as soon as they arrived to the scene.

d) Had we had sensible gun laws in place to prevent an 18 year old from obtaining weapons that create mass shootings.

I am disturbed, angry , upset , dismayed , and shocked as to how this was handled by BSO.   I cannot even think how the families must be feeling at learning about all of this.

What else are we to learn in the coming days? More pain and suffering for the families. More questions about Sheriff Israel and  BSO.  More calls for the Sheriff to take responsibility of this department’s  incompetence .

We need to do something to make sure that this never happens again – in the memory of the victims of this  tragedy.   If only it were that simple.