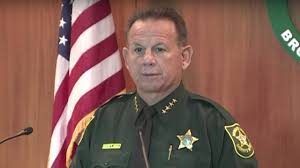 Our Democratic process is at stake yet no one is protesting. Newly elected Florida Governor Ron DeSantis , a Republican, is removing democrats that were elected. This dangerous precedent ignores the will of the people, allows any governor in the future to do the same against the opposition.

After the Parkland shootings I wrote an article that demanded that Sheriff Israel resign since the buck stops with him.   I pointed out that a year earlier the sheriff department was ill prepared to handle the shooting incident at Fort Lauderdale airport.   The parkland shooting, and the stunning lack of heroism shown by the Sheriff department officers, may have been prevented had proper training be brought to bear.    I also looked at Sheriff Israel walking around saying it was not his fault, and he did his best and we should not blame him.  No taking responsibility for the actions of his department. Rather he pointed some fingers and said that   However, even with my call for him to resign, the one thing I never called for was to have him removed from office without a vote. He was elected by the people and with no legal charges being brought against him, there is no reason at all to have him removed from office without an election.

Elections decide these who is  or isn’t .   No governor should be allowed to remove this power from the people.

The newly elected governor has annulled our voting rights and pushed his will on all of us.   The same deal happened with the Election Supervisor, where Snipes was removed from office by the governor.  Now he has excuses to remove School board officials. What is going on here?

The time to remove someone from office is at the elections at the ballot box.  If we allow the removal without this, then instead of the will of the people putting people into office, we have the will of an authoritarian system putting in and taking out whomever they like ignoring the will of the people.  Where shall we stand when people in power ignore our vote ?  Anything less is simply unamerican.

I hope Sheriff Israel fights his removal from office and wins.   I hope he runs in the next election and is defeated – by people voting against him.  However, what I want Is not what matters. It is what the majority of the voters want that makes our democracy.

Playboy Helps Fund Coralsprings.com
2003-04-22  •  0 Comments
White Bread community has some seeds in it after all   Many of the citizens of Coral Springs do not...
CITY COMMISSIONERS WANT 300% INCREASE IN THEIR SALARY
2006-10-01  •  0 Comments
Hope to Take advantage of Poor Voter Turnout November 7 by Howard Melamed Commissioner Ted Mena: Mo' Money Coral Springs...