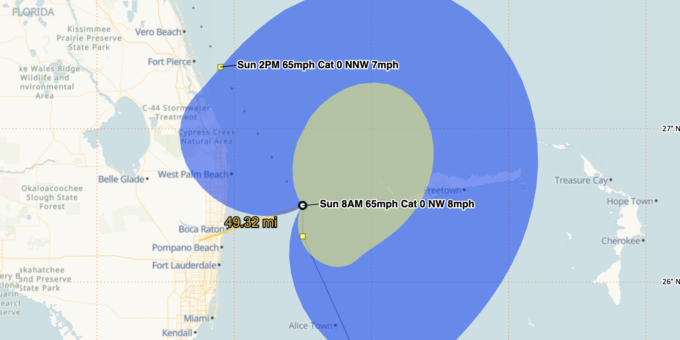 Goodbye ISAIAS! The storm is now located about 50 miles east northeast of Coral Springs heading towards other parts of Florida and the Carolinas. Looks like a combination of a southwesterly shear and lack of ambition moved ISAIAS from a CAT 1 hurricane with possible increasing in strength down to a strong tropical storm. The maximum gusts here in Coral Springs approached 35 mph , and we should expect about 1″ of rain. By end of the day today, we are all back to normal, watching for the next storm to come our way this season.

We did get to see how people actually mispronounced the name of this storm. It’s bad enough having to deal with a potential hurricane approaching, that we also have to deal with how to say it’s name. The people at the National Hurricane Center decided to be coy , and hit us with a biblical name, which was originally in Hebrew, and send it into Spanish. What they need to do in the future, when giving us the list of names they will use, give us a guide as well as to how to pronounce them. Or, let’s change this years old tradition , and start naming the storms after animals. Hurricane Turtle for instance sounds to me like winner.

ISAIAS has weekend to a tropical storm , but still is packing a punch. With its weakening , the storm headed north but is expected to move NW. The jetstream elevation wind circulation is about even in latitude with Coral Springs, about 80 miles to the east. If the storm increases in strength back to Cat 1 Hurricane during the late morning, we may see increase in wind speeds as it collides with Palm Beach county. We should be seeing strong winds from the north followed by winds from the northwest. When this happens, ISAIAS is heading away from us.

As predicted, ISAIAS is heading more North than Northwest and has pulled the storm away from the west path – which is us. The Jetstream circulation is north of the current position and surface wind circulation which indicates short term push of the storm on the north track ( right side of the cone). This is good news for Coral Springs and will result in the Hurricane Warning being lifted for Broward County. The wind speeds should be less as well but we can expect a good blow here and there. Still be vigilant in case ISAIAS decides to fool us all and make a left turn 🙂

As I have been saying, they needed to move to a Hurricane Watch level at emergency management and I am not sure what took them so long. ISAIAS is now tracking along the north part of its expected path, and may hit the coast of Florida about 100 miles to the north of us. This is based on the Jet Stream winds that pretty much has been dragging this storm from the beginning. ( See below ) . However, there could be a wobble and if so , this can still impact us tomorrow afternoon.

Isaias is coming near enough to us for everyone to make sure they are prepared. At this point the storm looks to be wobbling a bit, and may be heading more easterly which would be good news for us. However, I caution everyone that there are two guidance models…one predicts this storm to head up the eastern coast of Florida with us on the west side and the other one predicts Isaias to head up the the middle of Florida which may put us directly under the eye of the storm or to the east of it. We should know more by late tonight in which case…you need to be prepared for this Saturday and Sunday event.

Hurricane ISAIAS is increasing in strength. We are in the path of probability yet our government has not issued a Hurricane Watch. Why not? Cost? Panic ? FEMA ?

If you look carefully at the latest wind speed circulation ( picture above) you will see that the lower centre of circulation is west of where they have reported the center of the storm. Isaias can take a jog to the west and we will be in direct path of the hurricane without warning. let’s hope it does not and that all we will get is a good blow.

Earlier than expected, ISAIAS , is now Hurricane ISAIAS with wind speeds above 85 MPH being recorded by an NOAA plane traveling through it. This hurricane is impressive, since it formed while still interacting with the Hispaniola’s mountains which usually knocks these low pressure storms down a notch. Now ISAIAS heads on a NW trajectory towards Florida with an expected turn to the North late tomorrow night. It can slow down or speed up , but it will be gathering more energy and intensify due to the warm waters ahead. NHC predicted CAT 1 when it nears Florida, and now CAT1 and plenty of time to get to CAT3 – our prediction.

We need to be prepared, since so far no one has increased the threat level to Hurricane Watch, or even more, Hurricane Warning. That is because they really do not know what to make of the unexpected events of this storm.

As I said earlier today, Isaiah is now forecast to become a Hurricane within the next 24 hours. The emergency planners knew this was going to happen, and yet we are still in a Tropical Storm Watch event. We should be in an Hurricane Watch, since the deviation at this point in the hurricane track could put us in the heart of this storm.

As of 8 pm, we are in the probability cone of being hit by the Hurricane CAT 1 , Midday Saturday.

The conservative forecast should be that Hurricane Isaiah to strength to Category 2. All of the waters in its path are the highest temperatures on record. I am not sure why our forecasters are holding back on a potential threat.

Meanwhile I have told our workers that we are on a Hurricane Watch and we are preparing for this event. If it happens we will be ready. If it doesn’t then at least we were ready.

Hurricane Wilma taught us that there is no way to be certain.

At this moment the storm is 850 miles away. From the radar data up to the minute, the center of circulation has reformed north above the NE shore of the Dominican Republic. The tracking will be adjusted accordingly, but the center did not move over the high mountains of Hispaniola. This means that the storm with start to strengthen earlier than forecast. From the Radar it looks like it did weaken , but is still well formed.

I am not certain why our emergency planners did not ask us to go into Hurricane watch condition. It is quite possible that ISAIAS will move westerly and continue to strengthen over the warm waters. If that happens we may be looking at a Category 2 Hurricane by Saturday.

It is quite possible that Isaias has no interest in getting stronger and may fizzle out. Let’s hope but still be vigilant.

The Drought: Water Management Policy Doesn’t Hold Water
2007-07-06  •  0 Comments
by Howard Melamed Coral Springs Florida. 06/07/07: It rained today. Mother Nature obviously didn't hear the directive from the City...
Reflections of July 4th: Citizenship: New Americans
2001-07-04  •  0 Comments
To most Americans, Citizenship in the United States is something that was acquired simply by being born in this country. ...