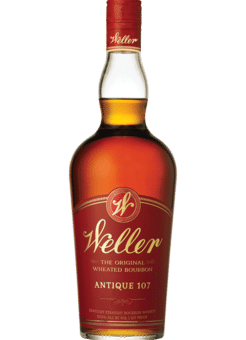 If you are a follower of the great bourbons made in this country, the Pappy Van Winkle 23 at a few thousand a bottle comes as a pure shock to most.  Rare to say the least,  I spent some time in search for something similar but does not put a hole in your pocket.  As well, I cannot seem to justify paying a few grand to only rent the libation.

I did have the opportunity to taste the 23 yr old Pappy in Washington DC at a restaurant that charged $100 a shot.  I had one shot and of course the wife was not please since she could not figure out how something made in Kentucky can be worth it.   It was to say the least a taste of heaven.  Caramel and smooth with a hint of sweetness that rolled out on both sides of your tongue.  You smile, then you look at the wife wanting another shot. Forget about it.  Forget about owning one of these bottles as well, and quite frankly a great a taste as it was, it really is not worth that kind of money.

I did a search to see exactly what makes Pappy Van so good.  As out turns out it falls under the category of a straight Wheated Burbon , which means in the mashmill is wheat instead of rye as a secondary ingredient.  This provides the sweetness and smoothness of the bourbon which needs to be aged at least 4 years to be considered straight bourbon with no food coloring added.   I became a detective.

What else do they make that is a wheated burbon ?   Weller bourbons.

References indicated that the same mashmill that is used for Pappy Van Winkle is used in Weller’s bourbon. The bottle that caught my eye was the Weller Antique 107,  53.5% alcohol.  Also the Special Reserve which was  45% ( 90 proof).

Now the fun begins.  Where can I buy a bottle ?  So I used Wine-searcher.com and tracked down several stores that sell it.  Total Wine has some in South Carolina, for $22.99 , if you can get it.  Limited stock they say which means no stock and they do not ship to Florida .   One Store in Tampa has a few bottles but they want $399.  NY state stores have but do not ship to Florida.  In fact the only places I found that actually have it for a reasonable price is California and Conneticut.  So I bought a few bottles for $99 for the Weller 107 Antique and $59.00 for the Weller  Special Reserve, and had them shipped.  They arrived and I immediately opened up each and poured out a glass .

It was liquid gold!

The Weller Antique 107 had a great smooth taste,  a hint of caramel, some vanilla and a sweetness that I distinctly tasted from the Pappy Van Winkle bottle.  It had a nice finish that lasted.   The Weller Special Reserve had a similar taste but a little weaker and less of a finish but still a great bourbon.

My thoughts are that the guys  at Buffalo Trace Distillery must make  a few hundred barrels of wheated bourbon, and the master distiller takes the best barrels to make the low volume Pappy Van Winkle.  Then he takes the remainder and bottles the Weller brands.  It has to be since Weller tastes so much like the Pappy Van Winkle.   At least that is what I want to believe of course since I do not want to layout a few thousand bucks when I can get the next best thing at $99 !    🙂

Good luck at hunting down a bottle or two of the Weller Antique 107.  Maybe when you take a trip to NY you can pop into a store and see if you can buy one and sneak it over the Florida border.