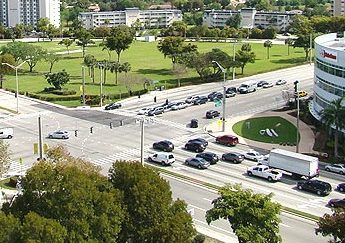 If you have lived in Coral Springs for a few years I am sure you will agree that vehicle traffic has increased substantially.  This is especially evident when you travel University Drive, Sample Road ,Atlantic Blvd, and Wiles Road, the main arteries of traffic in the city.  It takes about 15 minutes now to go from Atlantic Blvd to Wiles road on University Drive.  You all know this is the case but now you can know the reasoning why it is so, and why this is only going to get worse.

When the Downtown Coral Springs projects were approved by the city, no one took into account the traffic problems they will create. According to guidelines for the Florida Department of Transportation , Sample Road and Wiles Road are currently at or greater than the designed capacity.  The recently announced new  Downtown Coral Springs projects which include hundreds of apartments and offices spaces, will make traffic a nightmare and increase traffic accidents.  A When our brilliant city commissioners of the past started this endeavor – no one considered this.

Here are the Facts:

It used to be important enough to worry about the capacity of roadways in Coral Springs. Most developers had to show the increase of cars on the roadways based on the project they were promoting prior to the city accepting it.   An apartment project for instance, would add about 7 car trips per day per apartment.  100 apartments would increase the traffic on the adjacent roadways  by 700 cars.  Single family homes would increase the traffic by 10 trips per day.  The trips would directly translate to traffic, since the roadways can only carry so many cars without becoming congested. With 450 homes coming online from the development in University drive, 350 apartments on the SW corner of University Drive and Sample Road and more coming on the old City hall site, we can expect another 10,000  trips in the area.  Congestion to be expected.

Then of course, the speed limit will increase or decrease traffic, with slower speeds in School zones during rush hour…well you know…obviously brings traffic to a halt.

The Florida Department of Transport provides a great deal of information regarding all of this.  In fact, they also have the database that tells you the average amount of cars per day that are currently estimated on each roadway.  They even have guidelines as to how to design the roadways, how many lanes are required, and based on a Level Of Service to be provided, what the capacity or how many cars per day is suggested.  ( If you want to read about all of this then here is the FDOT 2018 Manual see page 87, tables).  Here is the important point :  For a poor quality level of service, which is one that you can expect traffic congestion, the capacity of a 6 lane road in a city is 41,200 Cars per day.( Level of Service in  Column C for major road) .

Here is the 2017 Average cars per day as given by the FDOT  ( see for yourself by clicking here and zooming in ) , focusing on Sample Road  and University Drive – DownTown Coral Springs :

Here is what is important on this drawing : Sample road west of University Drive is already at 38,000 cars ( 2017!) and the acceptable value is 41,200.  In other words,  this road is already approaching capacity and the new projects will add 10,000 more to this figure, making it even worse.  I am sure you have already experienced traffic at this intersection.  The Rates shown is based on taking the total traffic per year and dividing  averaging it over 24 hours and then dividing  by 365.  However.  FDOT also states a 50% increase in the Average Daily rate for rush hour traffic.  The increase puts this at 57,000 cars currently and 77,000 cars when the projects are completed,  which is over the capacity.  Traffic Constipation and there is nothing we can do about it.

Take a look as well at University Drive north of Sample, which shows 34,500 cars per day.  The main problem with this road is that not all of it has 6 lanes.

To add to the problem in the city, is the new Costco going up on Wiles and Coral Ridge drive.  Both these roads are 4 lanes , and are close or above capacity.  Once Costco is open, traffic will increase on all major roads on Coral Springs, including Wiles, Coral Ridge Drive, Coral Springs Drive and …yes …Sample Road as the high traffic customers head their way to the new store.

Commissioners Dan Daley and Larry Vignola were directly involved in changing zoning, and making decision over the past 8 years with the Downtown Coral Springs.  With no experience in land development, it is no wonder Downtown Coral Springs will be a traffic nightmare lowering  the quality of this city for all of us.