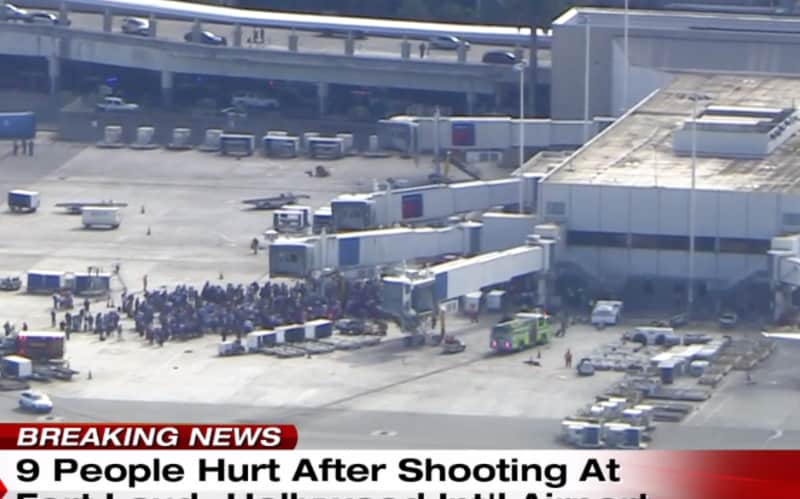 I was stunned to learn of the killings at the Fort Lauderdale airport yesterday.  The scenes on the news of people running for cover and the chaos that insued, false alarms,  and 5 innocent victims dead and 8 people in the hospital .  All of our prayers go out to the victims. Our praise goes to the brave  officers that came to the rescue. However there were no officers at the arrival lounge on security detail since if there were ,  the killer would not have been able to load the 2nd clip from n the gun or perhaps killed within seconds . Instead , reports say that it took Broward County Sheriff  department 80 seconds to get in the building to find the suspect on the ground his weapon pushed away to he side waiting for them.  Where was our security ?

How was this allowed to happen ?   Is our sheriff department, who is responsible for the security, and our lives at the airport doing all they can to keep us safe?  These will be the questions that need to be answered in the days ahead as we pick up the pieces and pray that this does not happen again.

Right now, several aspects of this crime can be reviewed and we now can come to some realization that we have become complacent in the way in which security has been applied in avaiation and at the airport.

The murder Santiago was allowed to not only transport a gun in his luggage, but the bullets as well.   He could have transported an AR15 if he wanted to , complete with the clips.   If that were the case, instead of 5 dead we may have had 150 or more dead as the semi-automatic weapon could have discharged a great deal of death in a 60 second period before the police officers were able to respond.  The mere fact that anyone can transport gun powder – bullets, in the cargo hold of our commercial planes is shocking and stupid. Without bullets the opportunity would not have been there .

I use FLL all the time. I do a lot of flying.  I believe that the security at FLL  has always been too soft.  We have a lot of well trained officers, but most are on the other side of the security screening.  I am sure that the review of security will show very few armed officers in the baggage carousel area, and no security of any kind scrutinizing people coming into the departure and arrivals areas of the airport.

In other airport around the world they take security more seriously.  I was in Israel several times last  year and the airport had protection .  Many people will say that we don’t need the level of security that those airports have. Many like me will say it’s about time we took the protection of our airports and travelers seriously .   In the past  decades no one has ever been killed at the airport in Tel Aviv. We now can’t say the same thing about our airports which at this moment are more dangerous then Ben Gurion in Tel Aviv!  With 50 percent of the tax money we pay Broward County going to the Sheriff department,  Fort Lauderdale Airport needs to be the safest in the world and we have the money to do it.

We need armed police officers with proper weapons at each terminal in every area and not only once you go past security. We need the best,   Not the oldest. Not a job placement program that the sheriff has created.   We can afford it.  Increase the security and add additional well trained officers.

Let’s be clear.  The response to a gunman in an airport in our country needs to be as close to instant as possible and with the right trained officers and weaponry that money can buy..  Not 60 seconds later as reported in the media, with the gunman allowed to change clips (3 times as report) . Adding more well trained officers, in key areas will go along way to deter and stop a maniac or terrorist from trying this again.

We cannot depend on the FBI.  They had Santiago in custody in November .  He told him he was sick.  Yet, they didn’t even  place him on the No Fly List!!!   He was even allowed to legally keep a weapon ( I am sure we will find this out as well)  . Such incompetence and I am sure no one will be fired as a result. We cannot depend on the  Federal Government to protect us.  Broward County Sheriff department  needs to be the best in the  country. They are our police force.

We may question the Broward County Sheriff in his preparation for these type of incident.   This was not unpredictable.  If you can think of attacks of an airport,  hitting the arrival area and departures I am sure are high on the list of events to train against.

Equally, I cannot believe that there is no plan in place for the evacuation of the airport short of passengers scrambling down the runways looking for a place to hide. These scenes will be shown over and over again as the horrified passengers scramble for safety.   Is this the plan?  Is this the best we can do ?  Was there a lack of coordination between the airport security staff who have access to cameras that can see what is happening and the Broward County Sheriff department?  Is it really every man women and child for themselves? This is a community that prepares itself for hurricanes.

Right now, I want to hear our Sheriff tell us that he will review all procedures, actions, and will report back to us as to what happened, and what he will be doing to make sure the very best protection is available at our airport. We pay his salary, and we elected him.  If he is the best he will show us why.

Sheriff Israel told reporters there is nothing that can be done and he will not increase security.   This is not the reposne that is needed .  If he feels he cannot do anything then he should resign.

Remember,  our county was where Mohammed Attah had lived and planned out 911.  I just cannot believe that we can be so soft about security at our airport.  I cannot believe how stupid.  We can morn the dead,  pray for the wounded, and praise all those brave  officers that came to the rescue.   We can also be smart and demand the best level of protection from our Sheriff.

I want to feel safe when I use the FLL airport- Again.  Sheriff Israel do the right thing and increase security at  FLL or resign .