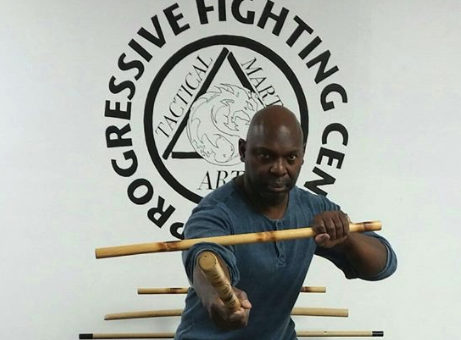 Coral Springs Fl 10/01/2017 – Self Defence training is for everyone. It is for those people that have a need to learn how to defend against people that want to do them harm. You may never use it, but it is something that is good to know how to do. At Progressive Fighting Center in Coral Springs, Ezara Sanders , the head instructor, provides you with that assurance.

With more than 35 years in the Martial Arts, Ezara has studied different disciplines and has focused on the Counterpoint Tactical System( CTS) , based on Filipino martial arts and created by Grandmaster Zach Whitson. A perfect example of CTS can be seen in the Jason Bourne movies or any of the latest spy flicks produced out of Hollywood, where CTS provides the action scenes corresponding to crisp fluid movements – effective striking and defending.

CTS can be described as a weapon-based integrated martial art designed for the street with an emphasis on realworld tactical counter offensive. This allows the defender to quickly assess and protect themselves from an attack and then moving toward a defensive counter attack neutralizing the threat.

Martial arts is for everyone, in our ever changing world I believe self defense is a must not just for men but also for women. It’s better to have the skill and not ever use it, than to not have the skill and need it. We offer one week of free classes as well as private lessons. come in an give it a try, you’ll be surprised at what your capable of.

The purpose of CTS is to train and certify students and instructors, making them well versed in every phase of civilian armed and unarmed combat. Unlike traditional martial arts training and schools, the CTS curriculum is designed with a survival based philosophy and is not intended to be practiced or used as a sport. No competitions. No belts. No trophies. This is serious training. CTS uses a “Civilian Use of Force Continuum” to help students better understand real world violence and how to appropriately respond to a bad situation.

Being an integrated martial art, CTS uses tactics from various arts based on multiple attackers, weapons, range or strategy to formulate a cohesive curriculum. As the range changes so does the combative tactics. Categories of training include weapons techniques such as single and double stick, knife, staff, gun, and the combination of stick and dagger; and empty hand techniques such as kicking, stomping, striking, punching, trapping, locking, throwing and ground fighting. Concepts of accelerated learning are built into the training process to more quickly advance the student’s combative skill sets.

The entrance to Progressive Fighting Center is in the back of 9625 West Sample Road, through the alleyway, inconspicuous and private, as it should be.

Vote is in! Citizens SAY NO GO to $77,000,000 of GO Bonds: City Commissioners Spending Habits – Stopped!
2018-03-14
The citizens of Coral Springs have voted against the city commissioners putting more debt on their heads.   They did not...

Fire at Sugar Mills Apartments Quickly Extinguished
2001-01-21
Engine 80 Arrives at the Scene, starts to fight the fire. Smoke can be seen on the 3rd floor At...
Coral Springs City Commission Meeting: SAME OLD SAME OLD
2001-11-06
It was absolutely fantastic. The most boring show on Television last night was the City Commission Meeting. Nothing worth mentioning...
CLOSING OF FIRE STATION 95 CITY COMMISSIONERS MAKE A MISTAKE …AGAIN
2002-06-30
06/30/2002: Coralsprings.com Howard Melamed How is it that the very same commissioners spent taxpayer's money on a Fire Station  that...