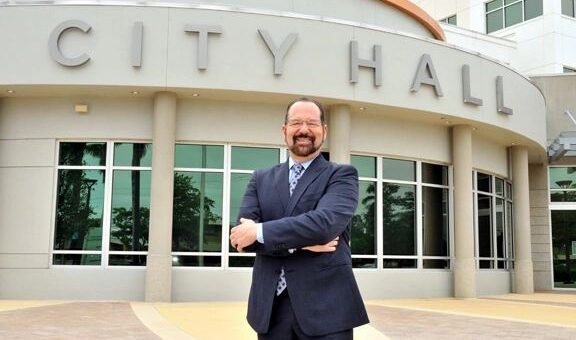 With so many decisions to make for the upcoming elections on November 3, the one that affects us most in the pocket book is the local city commissioner elections. This is where most of our property tax money ends up, right here in Coral Springs, and these commissioners end up spending it . Sometimes they spend it wisely and other times they burn it like paper.

It’s not the fact that I know him and he ran my first election ( the one against Roy Gold ) or the fact that he did not vote for me when I ran against Lou Cimaglia ( yep he actually voted against me – lost that one by 102 votes ), it is because he is the most qualified to represent us in seat #3. He also plays Ice hockey and a pretty good defenseman. At the city commission we need some that can check and keep the other commissioners checked.

This is an easy choice for all of us. Vote for Andy Kasten , City of Coral Springs City Commissioner Seat #3.

Goodyear Blimp has Flat Tire Crash Lands in Coral Springs
2005-06-17
Coral Springs FL June 17 2005 :    The sky is falling...the sky is falling! Fssssst. That is the sound...
Garbage In Garbage Out
2002-04-22
City - Southern Sanitation Deal, Garbage! by Andy Kasten  Coralsprings.com Cub Reporter and Gadfly I know that this will come...
US PORTS SHOULD NOT BE CONTROLLED BY FOREIGN GOVERNMENTS
2006-03-01
The recent set of events concerning whether or not a company from Dubai should be in charge of running several...
Copywrite 2020 | for Information contact Coralsprings.com 12453 NW 44th Street Coral Springs, Florida 33065 . Email: webmaster@coralsprings.com